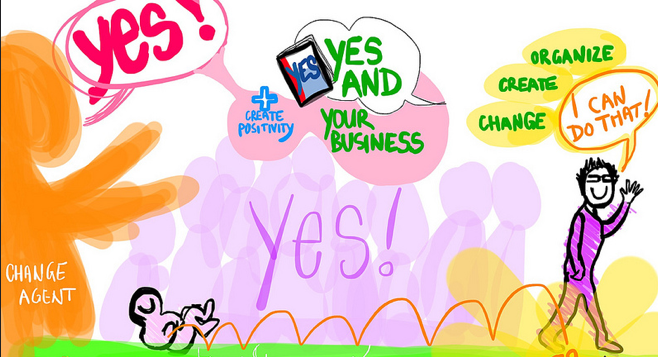 It’s no secret among the people who know me that I love Tina Fey’s book Bossypants.  Jason bought it for my birthday last year. I was approaching a “milestone” year and that point in my research where I felt like maybe I’d gotten myself into something I simply wouldn’t be able to pull off.  Knowing me as well as he does, Jason figured I needed a little humor, a little wisdom, and a little sense of female camaraderie to carry me through.  He suspected Bossypants would do the trick, and he was right.

In her memoir, Fey draws on four rules of improvisation that she believes work well as guiding principles for her career.  I think they also make great lessons for digital humanists, and I think, in the end, they really describe quite well the kind of DHer I’d like to be.

Now, obviously in real life you’re not always going to agree with everything everyone says.  But the Rule of Agreement reminds you to “respect what your partner has created” and to at least start from an open-minded place.  Start with a YES and see where that takes you.

Don’t click away yet; humor me for just a moment.  What appeals to me in Fey’s description of the Rule of Agreement is a recognition that the impulse behind your colleague’s work comes from a good, or at least neutral, place.  It’s a momentary staving off of the impulse to assume that someone else’s scholarship is fashioned out of ignorance or apathy or even ill will or that the conversation was initiated in bad faith.  Agreement doesn’t have to be about value: it’s not even about accuracy or support.  The Rule of Agreement is a social contract to respect the intellectual work of your peers.

To incorporate the first lesson of improvisation into digital humanities practice (and many if not most practitioners do this already) means to respect that there was intellectual work, time, and experience that went into its creation, and that we value the time, attention, and experience of our peers enough to approach it first with a willingness and openness to its value and its potential contribution to scholarly conversation.

If, as most people who write about the field seem to agree, digital humanities work thrives on collaboration and a vital intellectual community, then the success of that social contract begins with an impulse to respect each other’s work.  Perhaps, after this initial scene Fey describes, the first speaker tosses the “gun” aside screaming, “Help me! I was put up to it by the evil Dr. Doofenshmirtz!” or the second speaker decides to kiss and thereby disarm, the first.  The conversation can change without starting out in the negative.

Possibly, the scholarship in question may be cast aside in favor of something that does a better job of propelling the scene (field) forward.  It may be that we decide later that we want the scene (field) to go another way.  That’s fine. But what I think is important is that our first impulse is to respect one another’s contributions, and begin our discourse from points of agreement that then moves toward a conversation about where ideas, methodologies, and convictions diverge.  The Rule of Agreement is the best way to keep the open, collaborative, and generous community of digital humanities scholarship vibrant because it is an environment in which those who take risks are most likely to thrive.

Take, for example, the recently announced issue of the Journal of Digital Humanities, which features topic modeling.  (Note: Yes, yes… this is shameless self-promotion.  Read my article!)  There are some excellent examples of what I’m describing here.  For example, Matt Jockers responded first with a tweet: “Home sick today:-( Thank goodness for #JDHTopics JDH V2 n1.  Fantastic issue with fantastic eds and contributors. journalofdigitalhumanities.org.”  As another example, Michelle Moravec responded to entries by Megan Brett and myself by live tweeting her reading.

The emphasis here isn’t the orientation toward praise in these tweets (Although, praise is nice: who doesn’t like praise?).  The emphasis is a demonstration to accept by acknowledging and reading.  The conversation extends beyond scanning the table of contents and saying, “No more topic modeling, please!” (Yes, I know there are plenty of DHers who are sick of topic modeling.  I can’t blame them… but you should still read my article!).  The real power in the Rule of Acceptance is that it should lead us to the second rule: Yes, And.

The second rule of improvisation is not only to say yes, but YES, AND.  You are supposed to agree and then add something of your own… To me, YES, AND means don’t be afraid to contribute.  It’s your responsibility to contribute.  Always make sure that you’re adding something

Matt Jocker’s next tweet this morning does just that: “Inspired by new #JDHTopics, I’ve posted some lessons learned from topic modeling literature + my “secret” recipe;) matthewjockers.net/2013/04/12/sec…”  Successful scholarship, like improvisation, depends on generosity.  The “and” part is where you can take a conversation and refocus it.  For example, Matt’s approach to topic modeling and my approach to topic modeling are different.  However, Matt’s blog post on the LDA Buffet helped kick off my own work.  We take similar tools and use them for divergent purposes to answer different kinds of questions, and I think that’s what’s so brilliant about the second rule of improvisation.  Yes, And  creates diversity in scholarship rather than silencing it.

I suppose this is why I put the Topic Modeling Game that I created into a GitHub repository.  If it sits on my hard drive waiting some day for a publication that might happen 2-3 years from now, I’m not operating within the spirit of Yes, And.  Perhaps, CC-BY and Creative Commons licensing, GitHub, Stack Overflow, and Digital Humanities Questions and Answers are some of the best discipline-wide examples of the rule of Yes, And.

While disagreement may be native to scholarly discourse, agreement and openness complemented by intellectual generosity, I believe, are benchmarks of confident and prolific scholars.  This is particularly true in the digital humanities.  Digital humanists who seem to gain the most traction in the field also follow the third rule of improvisation: make statements.

The next rule is MAKE STATEMENTS.  This is a positive way of saying “Don’t ask questions all the time.”  If we’re in a scene and I say, “Who are you? Where are we? What are we doing here? What’s in that box?” I’m putting pressure on you to come up with all the answers.

In other words: Whatever the problem, be part of the solution.  Don’t just sit around raising questions and pointing out obstacles.

If the community in which you are operating has really embraced the first two rules, then the third and fourth come much more easily.  I’ve already mentioned the collaborative nature of digital humanities, and directly following “respect your fellow collaborators,” the best advice as to how to be a good collaborator is to do more than just ask questions.  Show that you are committed to the conversation by also taking a risk and presenting new ideas along the way in your research.  This is where social media, experiments like Digital Humanities Now, and scholarly blogs are so important to the field of digital humanities.

Questions posed in the spirit of “awareness raising” are necessary, but in presenting them, it’s incumbent upon the askers to take a first stab at answering the question themselves.

Suffer me this allegory, if you will.  A couple of nights ago, I was rustling around the kitchen far too late in the evening trying to figure out what to make for dinner.  I had a bunch of leftovers out on the counter: roast pork, broccoli, mac and cheese, rotisserie chicken, tortellini, fixings for salad.  My 9-year old daughter wanders in, clearly hungry, scans the food on the counter, looks at me and says, “So, are we ever going to eat tonight? … Just asking…”

Clearly, she knows we’re going to eat.  Sure, Jason and I have been known on occasion to pull out boxes of cereal and the milk and tell the kids this is “breakfast for dinner” night because we were too exhausted to cook… but there’s no real precedent for not feeding the kids.  She knows that.  She’s using the question because what she wants is to know that I have an answer all ready for her.  She wants me to say, “We’re going to order cheeseburgers and French fries with milk shakes.”

That’s not what I said.  What I said was, “Sure.  It’s left over night.  Get a plate and make it yourself.”  She needed help opening containers and slicing off pieces of chicken breast, but ultimately she had a plate of food that reflected what she didn’t realize she’d already learned about putting together a meal.  She was so proud of having “cooked” her own dinner (read: microwaved…. read: lukewarm… read: dried out…), that she ate every bite of what she was disinclined to even try 5 minutes earlier.

What’s the point?  Asking questions is important, but sometimes we ask questions because we lack the willingness or the time or the intellectual effort to make statements ourselves.  And in the end, as Fey explains with too-many questions in improvisation, we are forfeiting our responsibility to be part of the solution.  And, as my 9 year-old daughter discovered, we may like our own statements better than the responses we might get from others.

Essentially what she asked was meant to bait me.  She wanted more reason to be upset.  But being upset doesn’t solve the root of the problem: she was hungry.  Making her dinner solved that problem, and then some.  Of course, it wasn’t the tastiest dinner in the world… but that leads me to the next (and I promise the last) point.

THERE ARE NO MISTAKES, only opportunities.… In improv there are no mistakes, only beautiful happy accidents.  And many of the world’s greatest discoveries have been by accident.

When I was revising my entry for the Journal of Digital Humanities, I discovered that one of the biggest “take aways” from the model I was presenting had nothing to do with ekphrasis or gender at all.  It had to do with race and elegy.  In the first draft, I had attributed two poems to Paul Laurence Dunbar—“We Wear the Mask” and “The Slave’s Complaint.”  Initially, I had used the model’s grouping of the two poems together to show how well the model had worked.  In another article from a few years earlier, Dunbar, it was argued was the first to have written about African American identity through elegiac verse.  However, going back and checking all of my links, I noticed that “The Slave’s Complaint” was, in fact, written by George Moses Horton, whose publication predates Dunbar’s work by almost 100 years. If we’re looking for an origin of the use of the elegiac in African American poetry, Horton presents an interesting and uninvestigated new avenue to research.

By all accounts, this is the holy grail of DH—something new discovered among “known” data to be chased down, researched, and proven or disproven.  But, the finding itself isn’t about ekphrasis… or gender… or most of the other questions I was asking.  It was a mistake and a fantastic discovery on two different fronts that can lead to something completely new.  First, it demonstrates usefulness for my approach, even if it isn’t what I’d intended.  And second, there’s a distinct possibility that it can become the origin story for a discovery about African American literature that we didn’t know to ask.

In the end, the digital humanities I want to see (and that I believe in many ways already exists) is similar to improvisation—generative, collaborative, even playful—and as a framework for how we engage in scholarly discourse, Fey’s “rules of improvisation” seem like a good place to start.

**quotations taken from pages 84-5 in the print edition**